Click here to view all my research videos on my YouTube page.
Low-mass star formation: Overview
Stars are the lifeblood of the Universe. They provide light so that we can study kinematics of galaxies. They process gas to enrich the interstellar medium. They host planets upon which life may live. And when massive stars die, they collapse into black holes. Therefore, understanding stars is incredibly important for understanding all aspects of astronomy. Since a star's evolution is dictated by its mass at birth, understanding the star formation process and, by extension, star forming regions, is therefore also incredibly important for all aspects of astronomy.

The general star formation process has been understood for nearly a half a century. First, a cloud of gas initially undergoes an isothermal collapse due to the low optical depths and the long wavelength of the radiation. As the central region becomes more dense, it begins to efficiently trap radiation, and evolves almost adiabatically producing a pressure-supported object known as the first hydrostatic core; this object has a typical radius of 5au and a few Jupiter masses. The first core continues to accrete material from its surrounding envelope until its central temperature reaches ~2000K; at this point, molecular hydrogen begins to dissociate, triggering a second collapse phase. Once the hydrogen becomes mostly atomic, a second hydrostatic core, also known as the stellar core forms; the core continues to accrete material from the remaining envelope to produce a young star. 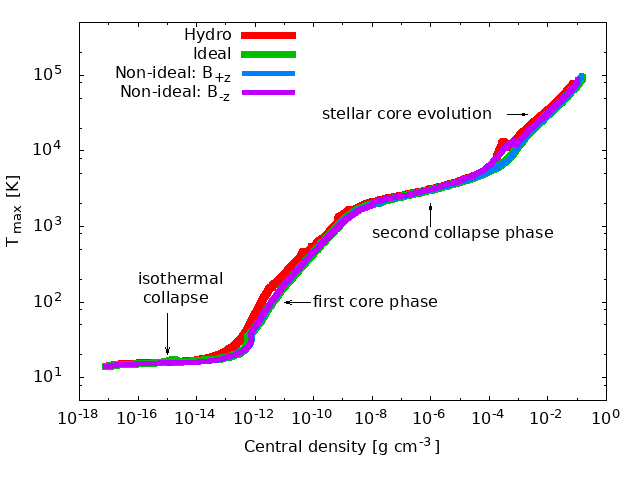 The phases of star formation.

During this process, the conservation of angular momentum results in the formation of a protostellar disc, known as a Class 0 disc. When exactly this disc forms is uncertain since they are observationally challenging to observe at this phase in their life, and simulations suggest they can form as early as in the first core phase or well into the stellar core evolution phase. Outflows are also launched during the star formation process, with slow outflows typically being launched during the first core stage and fast outflows during the stellar core evolution phase.

A simple graphical summary of ideal MHD and the various non-ideal MHD terms. 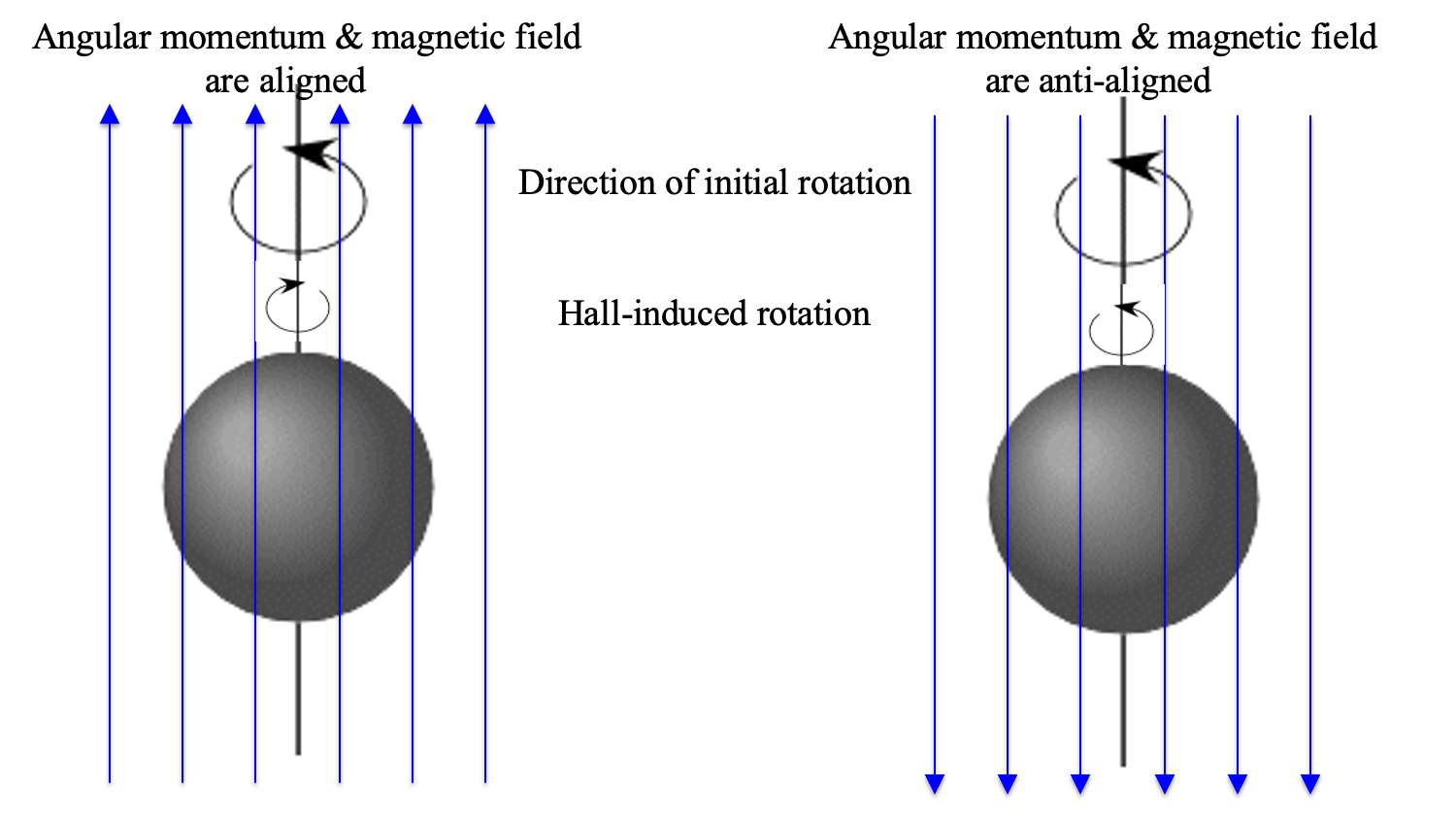 The contribution of the Hall effect to the spin of an object.
Low-mass star formation
Contrary to what is expected from observations, star formation simulations that include ideal magnetic fields launch well-defined first- and stellar-core outflows, however, they do not form discs. Simulations that include non-ideal MHD and are initialised with their magnetic field vector anti-aligned with the rotation vector form large protostellar discs, but launch weak first core outflows and no stellar core outflows. Read more here, or here where we discuss the importance of each of the non-ideal MHD terms.


A collapsing, one solar mass gas cloud, modelled in the presence of a strong magnetic field. The top video shows the evolution of the gas density in a slice through the code, and the bottom video shows the evolution of the magnetic field in a slice through the core; the left-hand model uses ideal MHD and the right-hand model uses non-ideal MHD with a cosmic ray ionisation rate ten times higher than the canonical value. The results are published in Wurster, Bate & Price (2018a).
Top
Low-mass star formation in low-mass clusters
Stars are born in chaotic environments, unlike the idealised environments used above. As described above, however, these regions are permeated with magnetic fields and are weakly ionised, thus are best modelled by non-ideal MHD. The movie below shows the effect of the magnetic field strength on the formation and early evolution of low-mass clusters. The large scale structure is clearly affected by the field strength, with more filamentary structures in the strong-field cases and clumpy structures in the weak field cases.
The formation and early evolution of low-mass star clusters containing 50 solar masses of gas. All models include non-ideal MHD and are initialised with vertical magnetic fields. The initial magnetic field strength decreases from left to right; the structure changes from filamentary to clumpy from left to right.
From our studies on the formation of isolated stars, the evolution is clearly dependent on the inclusion/exclusion of non-ideal MHD. On these low-mass cluster scales, however, the structure is approximately independent of the non-ideal MHD processes. On small scales differences do appear, with tighter filaments and weaker magnetic fields in the non-ideal models.
The formation and early evolution of low-mass star clusters containing 50 solar masses of gas. The models are initialised with vertical magnetic fields of moderate strength and include non-ideal MHD (left) and ideal MHD (right). The large scale structure is similar between both models, while the small scale structure in the clumps and around the stars varies.
Finally, protoplanetary discs form in all of our models, suggesting that there is no magnetic braking catastrophe. Thus, the catastrophe explored during the formation of isolated stars is likely a result of idealised initial conditions, and disappears once more realistic environments are modelled. The following image shows each star in each of our models, clearly showing that discs form even in clusters initialised with strong, ideal magnetic fields. 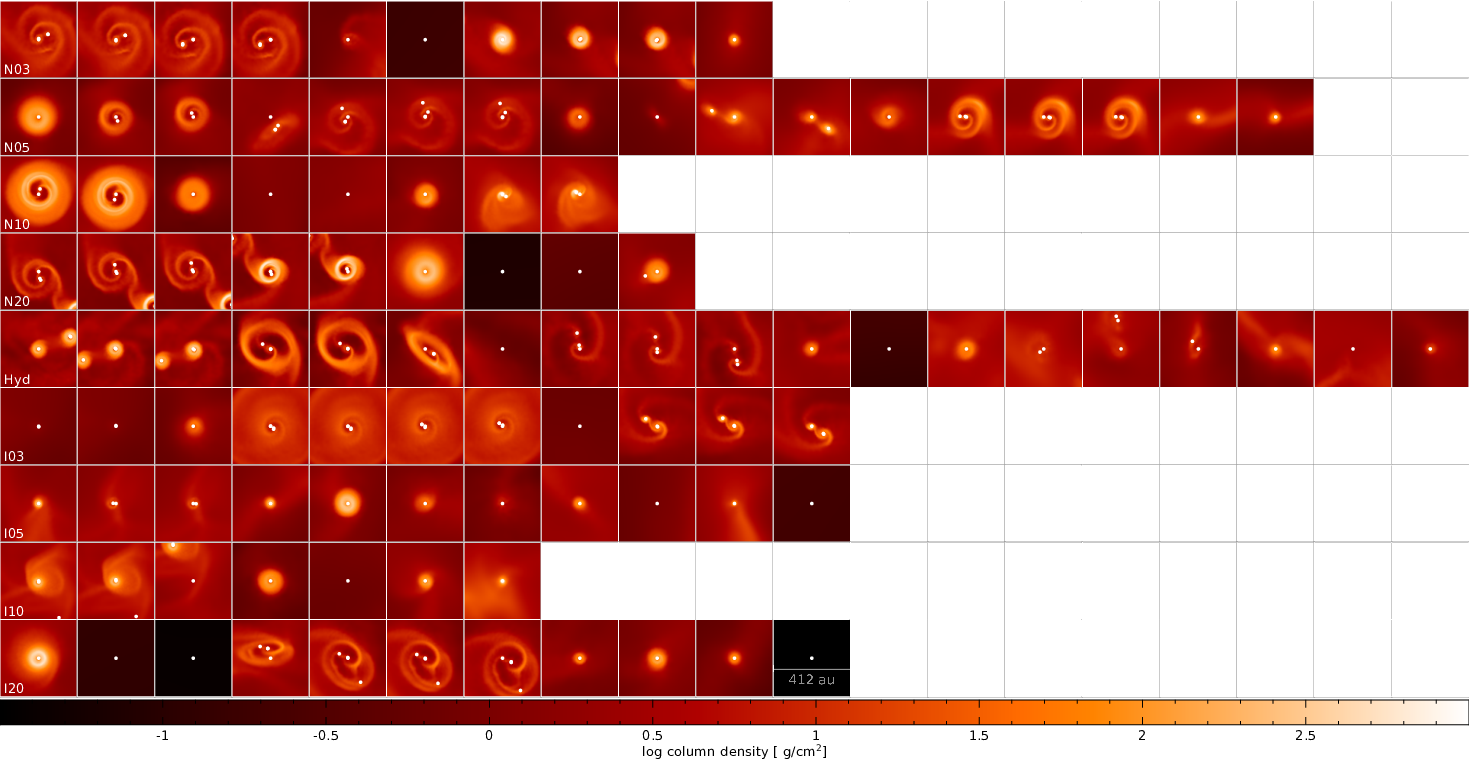 Gas column density around every star in our study; all the discs are orientated to be face-on, and the target star is placed at the centre of the frame. Each white dot represents the location of the star. Not all stars have discs, but a variety of circumstellar, circumbinary and circumsystem discs form. This suggests that there is no magnetic braking catastrophe. This is Fig. B1 of Wurster, Bate & Price (2019).

Disc Formation and Fragmentation
In Wurster & Bate (2019), we performed 105 simulations to investigate disc formation and fragmentation. We investigated the effect of initial rotation rate, magnetic field strength, magnetic field orientation, and the inclusion of the non-ideal MHD processes. Most model form discs, although those with slow rotations and strong, ideal magnetic fields are susceptible to the magnetic braking catastrophe and do not form discs. Discs are more likely to fragment in the presence of fast rotations and weak magnetic fields. The image below shows the evolution of the gas column density of each model in our study.

The following images show a density cross-section for models with varying cosmic ray ionisation rates at three different maximum densities. The progression from ideal MHD through reasonable ionisation rates to purely hydrodynamical is clear. Click on the image for additional plots of magnetic field strength, rotational and radial velocities.

Density slices parallel to the axis of rotation through the core of the clouds at three different maximum densities. The cosmic ray ionisation rate decreases from left to right. Blank frames indicate missing data due to computational limitations. (Click image for additional plots of magnetic field and velocity slices.)

NICIL: Non-Ideal mhd Coefficients & Ionisation Library
Nicil is a stand-alone Fortran90 module that calculates the ionisation values and the coefficients of the non-ideal magnetohydrodynamics terms of Ohmic resistivity, the Hall effect, and ambipolar diffusion. The module is fully parameterised such that the user can decide which processes to include and decide upon the values of the free parameters, making this a versatile and customisable code. The module includes both cosmic ray and thermal ionisation. Version 2.1 includes 6 cosmic ray reactions and 30 chemical reactions that involve neutral gas species (H, H2, He, C, O, O2, Mg, Si, S, CO, HCO), positive ions (H+, H3+, He+, C+, O+, O2+, Mg+, Si+, S+, HCO+), electrons, and positively charged, negatively charged and neutral dust. The default dust prescription is a single grain size, however, options for the MRN distribution or a user-defined distribution are included.

The source code to the module is publicly available from BitBucket.org and the reference papers are Wurster (2016) and Wurster (2021). Nicil has been thoroughly tested in SPMHD codes, but is written to be platform independent, thus can also be implemented into grid codes. The following figures show the non-ideal MHD coefficients and their constituent components plotted against density and temperature. Both sets of plots use a barotropic equation of state, thus are drawn from the same data set. 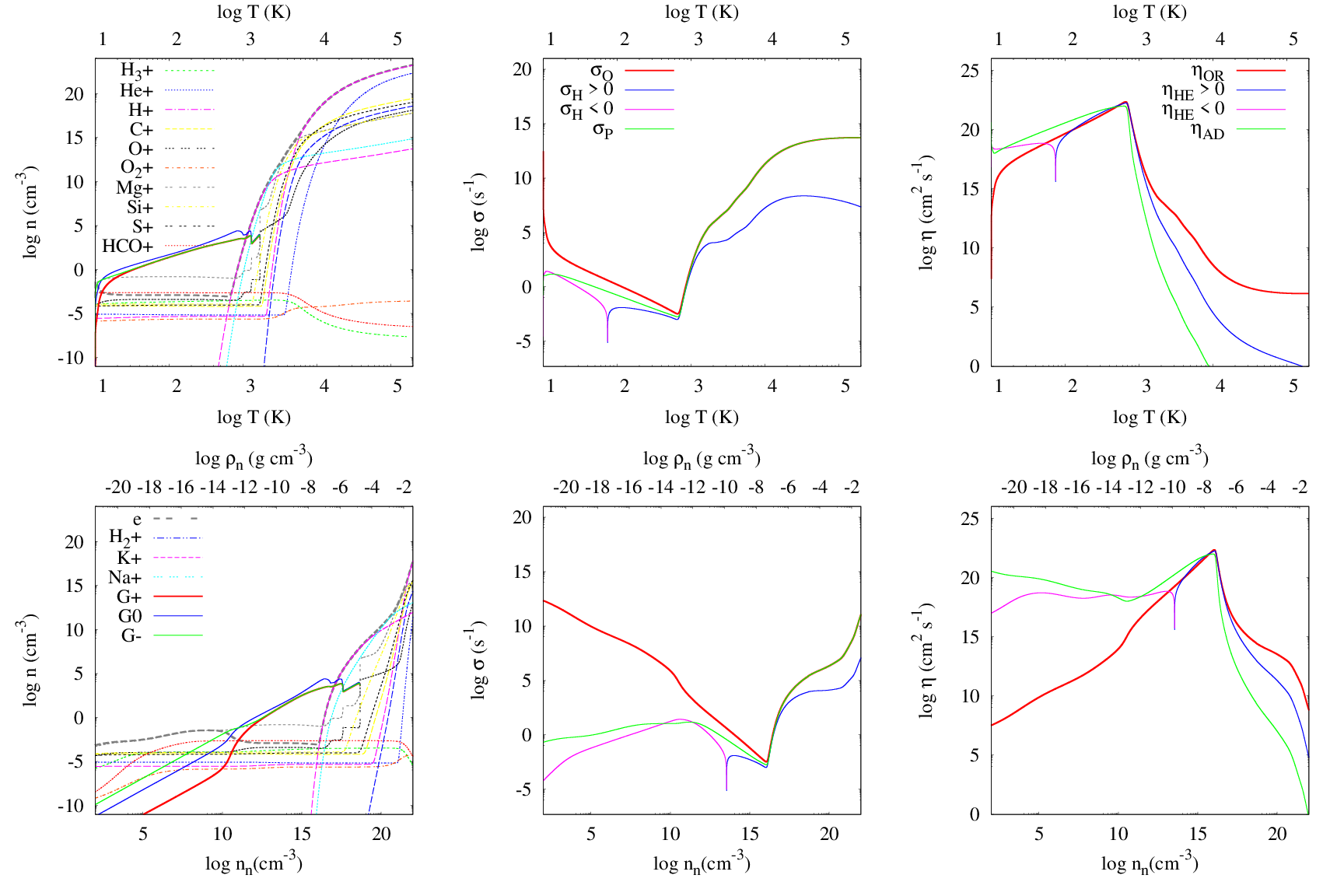 The library is under continual development, so please consult modifications.pdf and IMPLEMENTATION.txt in the home directory of the repository for details of how the code has evolved from that described in Wurster (2016) and Appendix A of Wurster (2021).